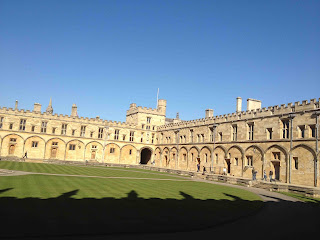 Literary festivals seem to attract good weather!  Lovely sunny day at  Christ Church Cathedral in Oxford for a discussion on cheating in sport. A great panel too: Daniel Friebe who, amongst other things helped Mark Cavendish with his autobiography; Richard Moore who is about to publish a book on he Ben Johnson/Carl Lewis rivalry that culminated at the Seoul 1988 Olympic 100m final; and Dave Farrar who has written on gambling in sport and commentates for football on ESPN. I even had a book with me this time (see my Words on the Water blog) and sold my first copy!
As for the discussion it was lively as ever. A lot centred on cycling given the panel’s knowledge in this area and the fact that – as usual – there were a lot of clued in cycling enthusiasts in the audience. The consensus seemed to be, whilst the sport is definitely not completely clean yet, it has got better. Part of this is that elite cyclists at least feel there is a chance they could get caught and punished. I don’t think the culture change is quite there, where self-regulation limits doping, but it is maybe on its way very slowly. The Alberto Contador story led to a lively discussion both during the debate and after, only some of which I can share on this blog. One person felt very strongly that it was unfair that only one lab. in the world could have made the positive clenbuterol test at the very low levels detected, so there was a lack of fairness involved in the process. I have some sympathy with this view. The counter argument is that a doping offence is a doping offence so he couldn’t complain at being caught. This led to a discussion on whether individual athletes should be targeted for more aggressive testing. It is really a case of whether you feel WADA and other anti doping agencies should act as passive referees merely adjudicating decisions or whether there should be an element of a more aggressive, almost investigative process, involved. The athlete biological passports really straddle these two areas. What is clear is that many of the high profile athletes charged with doping offences in recent years have been caught by law enforcement agencies or the courts, rather than the testing laboratories.
One interesting point. Why is cheating more common in some sports than others? What is so different about “sports” like golf or snooker when competitors self report an offence such as moving a twig in your backswing in golf or brushing a ball with your hand in snooker? Perhaps there is another book in all this?
Posted by profchriscooper at 15:09