Doping, drugs and cheating at the Paralympic Games

I finally have some time to blog after some happy times spent at the Paralympics; the highlights of what I saw being Sarah Storey at the velodrome, Hannah Cockroft and Shelley Long in the Olympic Stadium and, of course, Shiyun Pan the swimmer in possession of the amazing one armed butterfly stroke which made me forget that it was a Brit he was beating on the way to his world record.

So what are the similarities and differences in doping between the Olympics and Paralympics? Much is the same. Power and strength are key requirements for many Paralympians. So not surprising there were bans for users of steroids and human growth hormone [1]. Just as in the Olympics there were variations in the length of sentences. An athlete claiming that the green tea he took contained an unlabeled banned diuretic received a nine-month ban and missed the Games [2]. Yet someone who inadvertently took a banned substance in a nasal decongestant had a more limited three month ban; this finished a few days before the games [3] and she ended up winning a silver medal, coincidentally creating one of the moments of the games as the two British athletes fighting for the bronze medal in that event tried - and failed - to cross the line together to share the remaining medal [4].

So much, so similar. However, the two unfounded allegations of cheating that created media storms illustrated some of the differences between the two Games. Whilst the voices raised against the Olympic Chinese swimmer Ye Shiwen focussed on biochemical enhancements, those against the Paralympic 200m runner Alan Oliveira related to his equipment. Allegations of “technological doping” seem more prevalent in the Paralympics where naturally equipment is a bigger issue for more athletes. The French though remained equal opportunity accusers of the “unfair” advantages conferred on Team GB and Paralympics GB by their bikes and wheelchairs of [5].

More seriously are concerns about classifications. In the Olympics suh arguments are rare; after all the only classes are those based on gender and weight. Weight is readily quantifiable and, fortunately, accusations of males competing as females are rare. However, in the Paralympics allegations of athletes trying to cheat the classifications are more widespread [6]. Concerns about the fact that other athletes have unfair advantages seem to have triggered a more laissez faire attitude to cheating. Take the practice of “boosting”. Some Paralympians with spinal injuries lack the ability to raise their blood pressure when they start to exercise. This can limit performance. Therefore this pressure is “boosted” by extreme action; for example breaking a toe or blocking a catheter [7]. Boosting is dangerous and consequently banned. However, in an anonymous questionnaire study up to 17% of disables male athletes admitted to trying this [8]. This value is much higher than would ever be the case for an equivalent study on drug use. It seem likely that disabled athletes, in part, feel that boosting is justified if they perceive that others in their classification have a blood pressure response they lack. Rather like Ben Johnson’s excuse that everyone was doping so it made no difference if he did.

As many have noted with regards to Pistorius’s outburst, this level of conflict can all seen as a positive sign that the Paralympics have come of age as an elite sport. However, there is still one area that I think progress needs to be made. As long as the equipment needed to compete is expensive, many countries will be excluded from competing meaningfully; this includes many of the 25,000 people per year who become amputees as a result of land mines. Still perhaps it is a bit churlish to ask the Paralympics to being about world peace and economic regeneration as well as changing our attitudes to people with disabilities …..
Posted by profchriscooper at 15:45 3 comments: 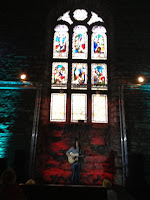 Posted by profchriscooper at 14:20 No comments: