Talking about doping with elite athletes 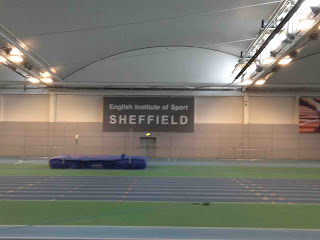 I was invited to an event at the English Institute of Sport in Sheffield last Thursday. The evening wasn't really about drugs; it was more about the use of technology in sport. I was actually invited to show off the new optical methods we are using to measure oxygen in muscle (for details click here). It was great to try this out on some young elite 400m runners and we saw some potentially interesting differences between the right and left legs as they raced round the tight corners at high speed.

Two of the guest speakers were the multiple medal-winning runners Roger Black and Peter Elliott. Their back-stories were really interesting in today’s days of talent spotting and financial support for elite athletes. Roger Black didn’t start in athletics until he was 18 years old and Peter Elliott plied a trade as a steelworker during his competitive days.

Anyway, I gave them both a copy of my book and it will be really interesting to see what they make of it. Chatting to Roger Black in particular made me rethink the parts of my book where I outline the rationale for the length of bans for doping offences. Currently the debate is between a two-year ban, a four-year ban or a lifetime ban. In fact even a two-year ban is much greater than penalties for apparently more serious non-drug offences. Let me explain. Doping is banned partly because it is cheating and partly because it is bad for an athlete's health.  Let’s look at some penalties outside the doping arena. Blatant cheating - say the deliberate handball by Luis Suarez that knocked Ghana out of the football World Cup - can result in as little as a one match ban. Harming an opponent can invoke a longer ban, but still the rugby player Calum Clarke only got a 32-week sentence for an action that resulted in a broken elbow. 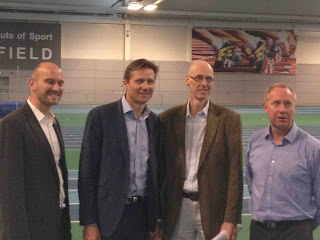 So why is the punishment so severe for doping offences, some of which may have only led to modest, if any, performance enhancements? In my book I focus on two possible reasons. One is the bad press that drugs get in society at large; the use of the moniker  "drug cheats" rather than just "cheats" feeds into society's disdain of these activities. The other is that as it is so difficult to catch people doping, it seems reasonable to have a tough punishment. After all we know from subsequent confessions that most offences that are punished are not the first time an athlete has used drugs.

However, I feel I could have put more emphasis on a third reason. Drug cheating is hidden cheating. By its very nature it not only cheats the athlete who loses out on a medal, it perverts what we are seeing as spectators. The event we are seeing is not the event we have paid to witness. A similar situation arises with match fixing. And here the penalties for cheating DO match those of doping (in fact they are more severe).


Doping also has a perfidious effect on all athletes. This was struck home to me when Roger Black said people accused him of cheating, just because he could run so fast (for the record I think these accusations are completely baseless). The fact that all athletes get accused of cheating because a subset are misbehaving seems to me a good reason for keeping the penalties for doping high.
Posted by profchriscooper at 02:16