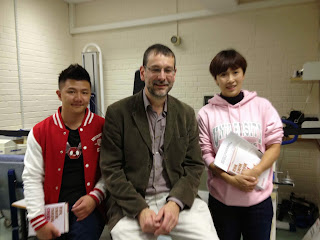 This is not a post about drugs in sport, but instead another visit to my university by elite athletes. Chen Yibing, the king of the rings, and Yang Yang, a short track speed skater, visited our Human Performance Unit last Monday. It was great to see them. Yibing was most interested in our biomechanics set-up, whereas Yang was treated to a video and discussion about my latest speed skating research with the UK team. If you want to find out more about this you can click here. I gave them both copies of my book and they both kindly agreed to sign a copy. I now have copies signed by Alistair Cook, Roger Black, Laura Trott, Chen Yibing and Yang Yang - not a bad collection!

On Tuesday evening Chen Yibing and Yang Yang gave a talk at the University. You can see photos of this by clicking here. They, especially Yibing, are real celebrities in China so it was interesting to be at a lecture where over 90% of the audience was Chinese. This meant 90% of the laughter at their jokes came after the Chinese version. The smaller non-Chinese speaking contingent had to wait for the English translation and try and make enough noise between us to make up our lack of numbers.

As usual with elite athletes their stories were inspirational.  One thing I did note about Yibing’s story was that, whilst we might labour under the assumption that talent spotting in China is more scientific than here in the UK, in fact he was recognised in much the same way as would happen in this country, by performing in local gyms, winning competitions and hence coming to the attention of the national squad. Then of course the hard work really began.

I would like to end this blog by giving you a link to his gold-medal performance in the Beijing Olympics on the rings. Click here for this. You don't normally associate this discipline with beauty rather than strength. However, I think you will agree this is as beautiful as any gymnastic performance on the floor, pommel horse, beam or asymmetric bars.

P.S.  I got very excited at first when I realised that Yang Yang was coming. This is the name of a speed skater who is both an IOC member and a committee member of the World Anti Doping Agency. However, this is a different speed skater (who competed at the same time and shares the same name). Still my Yang Yang was also great to talk to!
Posted by profchriscooper at 13:01