Words by the Water 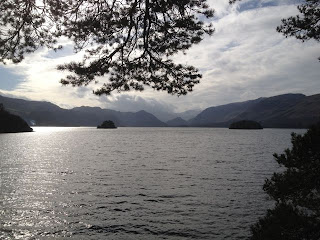 Just had a great time at my first literary festival: Words on the Water at the Theatre on the Lake at Keswick.  I was really well looked after by the organisers. I think I have found my retirement plan: wonder around the country to beautiful venues, hear interesting people speak and then buy their books. The highlights included chatting to Stephen Moss the naturalist, hearing from Mihir Bose about who he thought would light the Olympic Flame and learning from David Bainbridge that middle age was the best time of your life (actually he said most productive, but I misheard deliberately). But best of all was having a wonderful dinner sitting next to Jenifer Glyn at the Lyzzick Hall Hotel. Her talk was about the DNA crystallographer Rosalind Franklin. The perspective was different to more academic speakers I have heard as Rosalind was her older sister. It was a fascinating insight into the mind and dreams of someone whose life ended so young. Rosalind Franklin was of an era that meant she would never have considered herself a “female” scientist; just a scientist. Jim Watson of course inadvertently created the “Rosalind Franklin” industry by the cruel way he portrayed her in his book ‘The Double Helix’. Still there is no doubt that Franklin was a talented scientist who, even if she had been given any, would not have rested on her laurels post the Watson/Crick/Wilkins DNA days. Indeed her subsequent Tobacco Mosaic Virus work was really important.
But what about Drugs in Sport? My talk seemed to go OK, though I felt a bit ‘naked’ going to a book festival and book signing with no book (the OUP lawyers are still mulling over some sections). Still I had great questions. I have learnt not to underestimate either the intelligence or knowledge of these rather eclectic audiences. I was happily talking about hormones until half way through my answer I realised that my questioner knew more than I did. Not surprising as it turns out he was a retired professor of endocrinology! Undaunted I then proceeded to discuss some of the legal ramifications of the current court case about the UK’s lifetime ban on “drug cheats” competing in the Olympics. It turns out this questioner was a lawyer who had been involved in handling many of the most famous drugs cases. Ho hum. Suitably chastened I ducked the Lance Armstrong question, at least until afterwards in the bar.
Anyway my view, for what it is worth, is that WADA and the Court of Arbitration in Sport will win over the British Olympic Association and Dwain Chambers and David Miller will be free to sprint and cycle for us in London 2012. My new lawyer chum thought otherwise, but what does he know? My personal view is that it is important that the BOA case fails. Not because I want us to have a chance to do better at the Games, but merely that if one country can have stricter anti-doping rules compared to WADA it seems equally likely that another country will be able to have more lenient rules. Whatever you think about the pros and cons of drug testing and drug bans, sport is about trying – as best as we can – to have a level playing field.
More later after the BOA court case is decided (and also about Albert Contador when I can be sure that the case against the multi Tour de France winner is finally over for good).
Posted by profchriscooper at 15:11